Construction of the East-West Cycle Superhighway (or CS3) in London has been continuing, and the sections on the roads in Hyde Park are nearly built, and to pleasing quality.

From the already-famous section on the Embankment, which opened on 6 May (the opening was Boris Johnson's last act as Mayor of London) the route is programmed to go via Bridge Street, Parliament Square and George Street (already constructed) via a new path on Birdcage Walk by St James's Park, a new bollard-segregated section past Buckingham Palace (mentioned in this post), and an upgraded path along the margin of Green Park in Constitution Hill, to the crossing of Hyde Park Corner, and thence along South Carriage Drive in Hyde Park. It will then turn sharply north on to West Carriage Drive (wrongly labelled as 'Exhibition Road' in TfL's own diagram, below) and exit the park at Lancaster Gate. 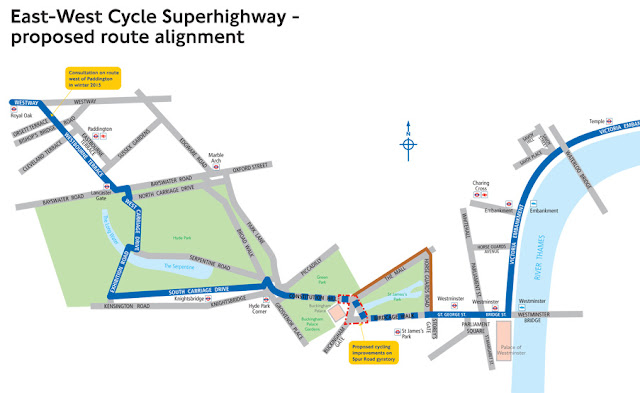 As I've pointed out before, this routing is not the most logical, and I expect most cyclists actually following the east-west route to connect from Apsley Gate at Hyde Park Corner to Lancaster Gate via the existing cycle path of the Broad Walk and the North Carriage Drive, which is more direct than the official route, which seems to have been chosen for political reasons between the Royal Parks Authority and Transport for London. I guess they did not want to 'encourage' more cyclists on to the already busy Broad Walk, full of pedestrians, cyclists and skateboarders, which has painted-line segregation and a poor design which is not effective at keeping pedestrians and cyclists apart. (One foolishness is that the benches must be accessed from the footpath by crossing the cycle path – it would be better to use the benches as a barrier.)

Rather than change this poor design in Broad Walk, the authorities have chosen to built a new high-quality route along the South and West Carriage Drives (which already had cycle facilities, but poor ones). This is in many ways a good thing. It creates a high-quality, high-capacity motor-traffic-free connection from Hyde Park Corner to Kensington Gardens and South Kensington (Exhibition Road) to replace the far too narrow, existing line-segregated path along the south side of the park. At the same time it benefits walkers, taming the rat-run of South Carriage Drive and taking flows of cyclists on the east-west axis well away from flows of pedestrians. The work on West Carriage Drive is also, in itself, welcome and long-overdue, replacing the strange and illogical mixture on on and off-road 'facilities' on different sides of the road that existed before, and creating a top-quality cycle connection north-south across the park from Exhibition Road to Westbourne Terrace, linking South Kensington to the future western extension of the Superhighway.


When I viewed these facilities in early July they were not yet open, though of course cyclists were trying to use them. The building of the linkage through Lancaster Gate, a hitherto highly unpleasant racetrack gyratory and major blockage on the cycle network, had not started. I believe work in Westbourne Terrace, further north, has started, however. This is the last part of the Superhighway that is currently approved for construction. In April consultation took place on the next section, taking CS3 (and the Superhighways) firmly into West London, via the elevated Westway section of the A40. This idea, by Johnson's cycling commissioner, Andrew Gilligan, was not universally welcomed by cycle campaigners, who generally would have preferred a more accessible and humane route on the surface, but I supported it, as, due to the obstructiveness of the Royal Borough of Kensington and Chelsea, who seem to have a horror of the idea of cycle tracks on their roads, there was really no alternative for westwards continuation at that time. Transport for London have jurisdiction over the A40.

We await a decision by the new Mayor Sadiq Khan on the continuation of CS3 on the Westway, as well as the northward continuation of CS6, the North-South Superhighway, from Farringdon Road to Judd Street, and the commencement of works on CS11 from Portland Place to Swiss Cottage. All these were consulted on earlier this year, and, despite the vicious campaign against CS11 that I reported on, all secured a high level of public support. Khan must now start to make good his election promise to 'Make London a byword for cycling'. So far we have only heard generalities from him (except for a commitment to create a new walking and cycling bridge in East London and a commitment to pedestrianise Oxford Street, which may or may not work out well for cycling). He has also not yet appointed a successor to the highly-successful first Cycling Commissioner for London, Andrew Gilligan. Caroline Russell, Green London Assembly Member, has reported that this job, which is to be re-badged as 'Cycling and Walking Commissioner', is to be advertised soon. I am worried about this.

The Cycling Commissioner post that Gilligan occupied under Johnson was a political post, as it needed to be. The job was not advertised because it needed to go to a political ally of the Mayor for the role to be effectively accomplished. In, Gilligan, an ally of Johnson, and indeed a friend, political heft was combined with diplomatic capability and  a great deal of knowledge about cycling in London, with a recognition of it as being generally dreadful, and a determination to knock political  and bureaucratic heads together in order to change things. A journalist, and thus an expert at publicity or propaganda, Gilligan was not a technical expert but understood enough technicalities to challenge experts when they stood in the way of progress, and was able to work with campaigners, if not always in complete harmony, then with a constructive friction; a kind of double-agent if you will.

Advertising the post of Cycling and Walking Commissioner suggests it is to be be downgraded to a technical role. A technician is likely to be ineffective in this highly political position. But we will have to see; I hope my worries on this are unfounded. They could be, with someone who is an expert in the post of Commissioner, but a strong driving force from the Mayor and Deputy Mayor for Transport. I suppose Gilligan could re-apply for the job; he is clearly the most qualified person to do it. His report on the progress of the first three years of The Mayor's Vision for Cycling, Human Streets, is worth a read.

While the segregated Superhighways have been the massive success we knew they would be, they are still far from where most Londoners live and work. They only represent the bare beginnings of a functioning cycle network. It would be a crime for momentum to be lost and for the the expertise now built up within Transport for London in building high-quality, effective cycle infrastructure to be dissipated, which is what will occur if we do not rapidly have a plan for expansion of the network, in all directions, beyond Zone 1. Khan has popular, fully developed 'shovel-ready' schemes at his fingertips in CS3 as far as Wood Lane, CS6 as far as Euston Road and CS11 as far as Swiss Cottage. He needs to approve these now, get his Commissioner in place, and produce the detailed plan for the next four years.

He has been busy, of course, with the EU referendum, and, in the aftermath, with pressing the government for new powers to allow him to keep London as closely linked to Europe as possible; these were the right things for him to be doing, and the strategic and financing powers he is seeking, if he is successful, can only be good for continuation of the cycling programme and modernisation of the streets generally. In particular, he needs far more authority over the infrastructure currently controlled by the boroughs, the Corporation of the City of London, and the Royal Parks. The lack of this authority is pointed to in Gilligan's report as a major reason why progress  on the Mayor's Vision has not been faster. Nevertheless, Khan should not repeat Johnson's mistake of moving slowly, being in office for eight (or four) years, and scrambling to try to build a world-class cycle network in the last few months of that.