Further to my last post on the corporate lockdown Olympics, I heard former Labour sports minister Richard Caborn on Radio 4's today programme this morning defend the 2006 Olympic and Paralympic Games Act that he piloted through parliament, at the behest of the IOC, and, no doubt, Tony Blair, that introduced unique civil liberty violations into the British legal system. His defence was that the Olympics had been delivered on-time and on-budget, that they would be a great success, that it was necessary to protect the value of the sponsorship deals for the sponsors, that nobody had been prosecuted under the Act, and, basically, he had had not had any choice anyway as it was what the IOC had demanded.

For let's look at some facts. The Olympics has been delivered on-buget according to Caborn? They were originally supposed to cost only £4 billion. The Commons Public Accounts committee now believes the cost will be around £11 billion, but other calculations, including the costs of public transport upgrades, put the figure at £24 billion. Of the £11 billion, the National Audit Office estimates the private contribution will now be only 2%: down from an originally projected £738 million to £165 million. This tiny private contribution is all we have got for the attack on civil liberties that is the 2006 Olympic Games Act!

It may be true that there have been no prosecutions as a result of the Act, but the stories of the persecution of small traders who have tried to use Olympic symbols and words in their marketing are true. You can stroll through Stratford, as I have done, and see the hasily-changed signboards on the hotels and cafés that had to bow to the threat of action from LOCOG under the 2006 Act.

Amongst other facts not mentioned in Caborn's attack on critics: that there will be no public park as a legacy of the Games. The land will be private. You may be allowed into it, but that will be discretionary.

Early promises of a sustainable transport legacy from the Games have come to absolutely nothing. Here's Sustrans's projection from 2007 of the "green" cycle and walking routes that were supposed to be built to Wembley Stadium in time for the Olympics, as an Olympic legacy (just a small part of the plan for "Olympic Greenways" for thew whole of London).

None of this ever happened. None of it. Zero. Sustrans and Brent Council hoped money would come from the Olympic Development Authority, but as the costs of the core infrastructure of the Games spiralled, all such greenwash was forgotten.

In Stratford town centre we have ended up with some curious new anodised metal artwork... 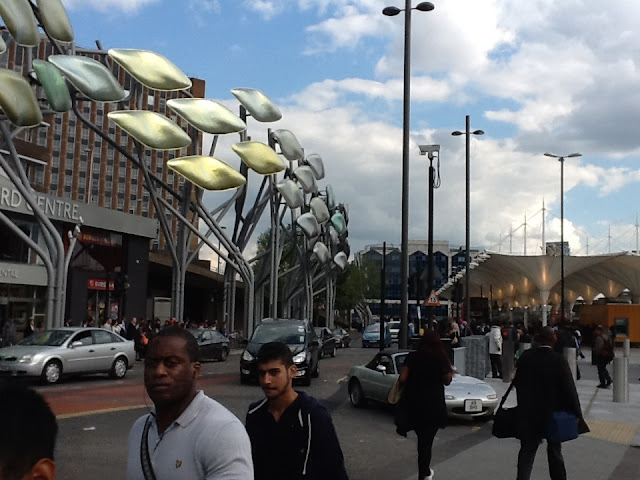 ...opposite a "1.9 million square foot retail and leisure destination" by a crappy shared pavement... 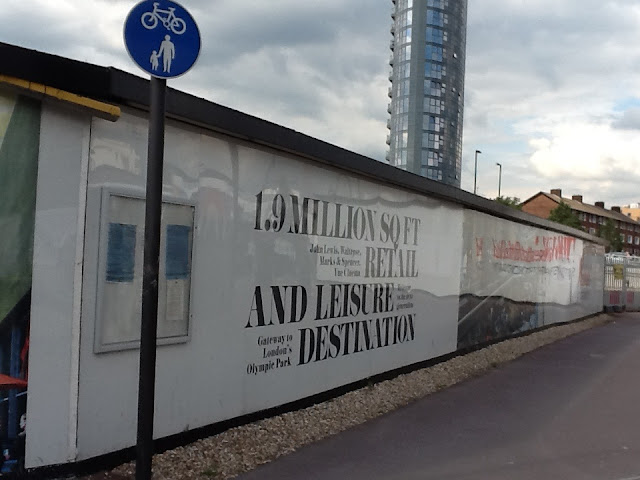 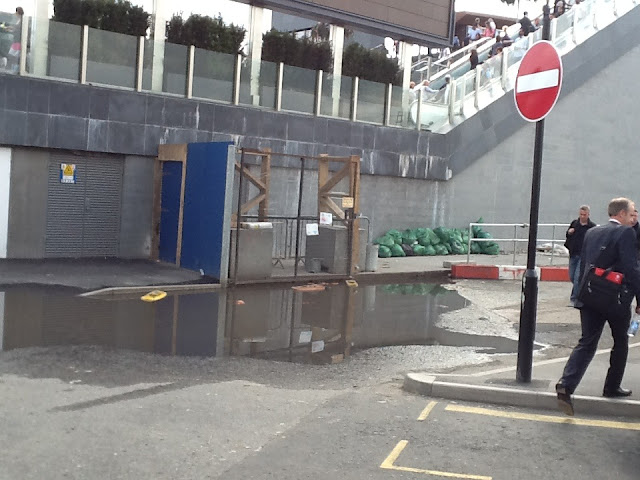 ...and no cycle access or cycle parking during the Games. (In that link Westfield Stratford "Strongly advise customers to use alternative transport measures to visit the centre whenever possible"... and they mean... alternative to the bike.) 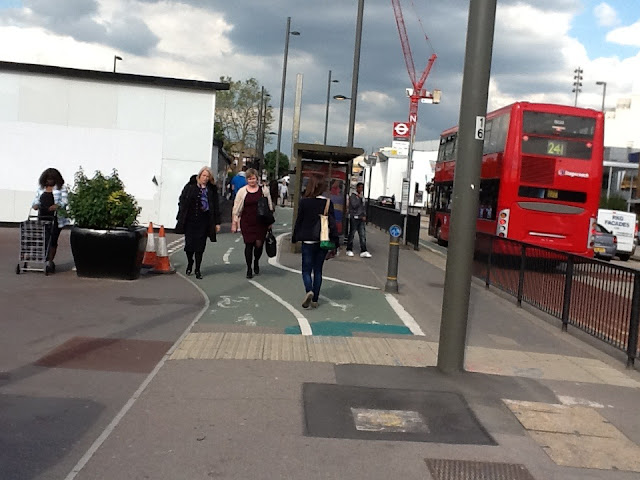 ...that go a few metres exactly where pedestrians need to walk before ending in a depressing display of meaninglessness... 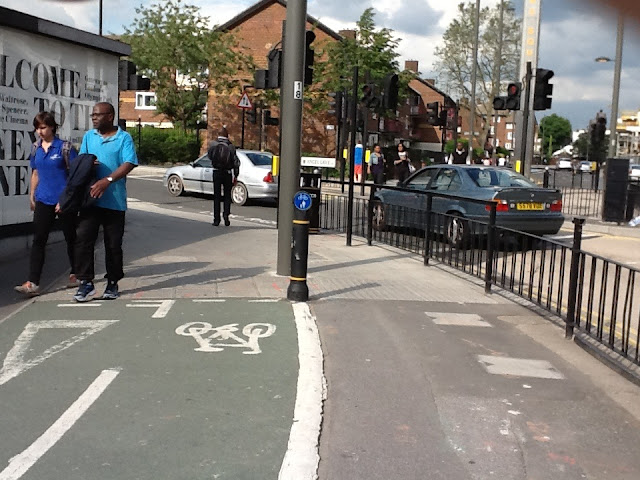 ...and including this new camouflaged cycle track with the most subtle possible grey-on-grey markings, again going just a few metres before colliding with a bus stop and turning coyly all "shared-use": 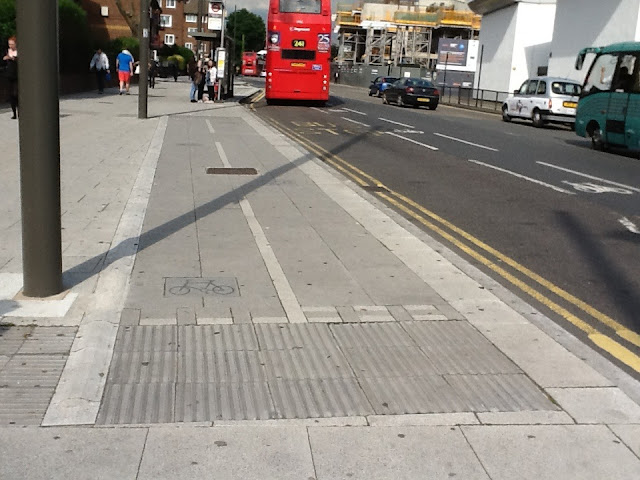 Here's another view with the track being sensibly ignored by an on-road cyclist, and showing a pole placed centrally on the tiny track for extra fun: 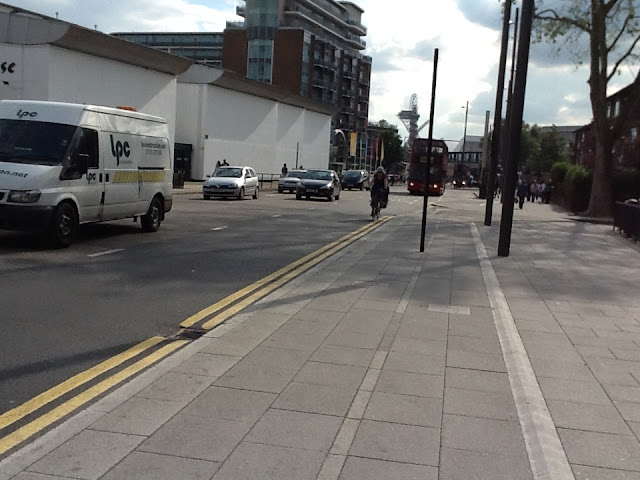 Just to the east, as this blog post by As Easy As Riding a Bike tells us, on the main access road to the Olympics from the rest of London, the A118 Stratford High Street, the promised Cycle Superhighway was never delivered, owing to crossed-wires between Newham and Boris Johnson, and cyclists ended up with absolutely nothing except cycling on a standard urban-motorway-style road.

In a couple of short months all the games will all be over, and what will be left? There's the stadium that nobody knows what to with, which may become a football stadium or something to do with  Formula 1 (no, I can't work that one out either), some other sports venues, such as the Velodrome, which may have a more useful future, and some other bits and pieces including a strange piece of twisted metal sculpture. The "1.9 million square foot retail and leisure destination"will be there, certainly, and a discretionary-access private park that looks like it will probably eroded by housebuilding that local authorities will have no control over, because a quango, the Olympic Mayoral Development Corporation, will control it. The "Ethical Olympics Pledge" signed by Lord Coe and then-Mayor Ken Livingstone in 2004, which was supposed to define the long-term benefits that local people were to gain from the Olympics, was unceremoniously torn up by the ODA when it came into existence as a result of Richard Caborn's 2006 legislation.

As Anna Minton, (who spoke at a Movement for Liveable London meeting in March) has written:


The true legacy of the Olympics is this litany of collapsed deals and broken promises by a confusing array of quangos and companies. An Olympics in tune with the public spirited legacy claimed could only have gone ahead if the concept of the ‘public good’ retained some meaning in today’s political discourse. Instead this term was quietly removed from legislation in 2004 reflecting the extent to which the market has squeezed the notion of the ‘public good’ out of politics.

It's a depressing view, but it's a conclusion I find it hard to disagree with looking today at Olympic London. The people of London deserved better, and Richard Caborn, and other ministers in two governments, plus the Mayor of London, should be ashamed.