A damp but colourful Spring Clean, and pavement parking in Brent

I am sure Climate Rush's Spring Clean protest against London's filthy air quality, and against Boris Johnson's policy of trying to conceal the problem by gluing the pollution particles to the roads by treating them with calcium magnesium acetate powder near monitoring stations, would have attracted a much larger crowd, had not London been deluged with heavy rain for most of the day on Thursday. As it was, a small but spirited and colourful crowd marched from DEFRA in Smith Square to Parliament Square waving feather dusters and banners, to make the point that obeying the UK's legally-binding international treaty obligations on clean air should not be regarded as optional by the government and the Mayor of London. The lives of those who die because of our polluted air (estimates range from between 19,000 and 29,000 per year for the UK) should not be treated so lightly.


Another group who seem to think that obeying the law is optional are some of Brent Council's drivers. Here I witnessed not one, but two of Brent's vehicles parked on the pavement in Stag Lane NW9. The more distant one is clearly making the footway impassable.

Perhaps the drivers of these vehicles have become confused about the function of the footways because of the way in which Brent, along with many other authorities, is now designating parts of them, in many places, for parking, as here, not far away, in Church Lane, Kingsbury NW9.

I have looked up Brent's criteria for deciding where the designation of footway parking is appropriate.
It says here:


Brent Council has the power to exempt certain streets from the regulations to enable drivers to park either partially or fully on the footway to maintain the safe flow of traffic. At the same time, the conditions must be right to protect pedestrians, so where exemptions are granted, there is sufficient access for pedestrians without being forced into the road. There are certain criteria which have to be met before a street is granted exemption and they have been approved by Brent Council's Highway Committee.

So it's to do with maintaining "the safe flow of traffic". But here is a wider view of the street in question. 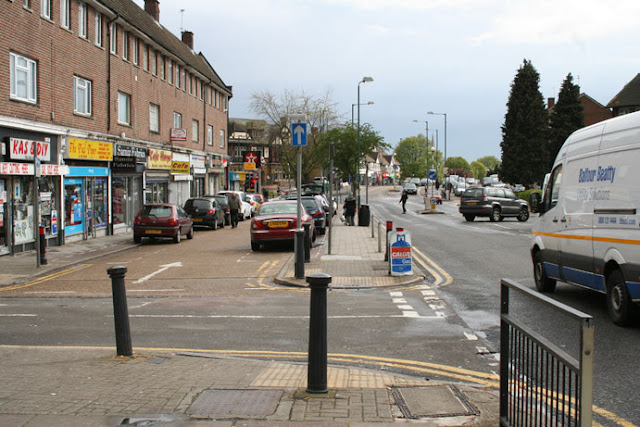 This pavement parking exemption is clearly just here to allow parking outside this small parade of shops to be doubled up, both sides of the service road, and still allow space for a car or van to get through. There is in fact pavement parking allowed on both sides of the service road.This has nothing to do with maintaining a "safe flow of traffic". The flow of traffic on the road is unconnected with this, being maintained by the presence of double yellow lines. And note how the word "traffic" is here being used implicitly to mean "motor vehicles", not pedestrians or cyclists. And note, again, the enormous total width available on this road, as so often in suburban north Brent, but that clearly there is not seen to be the space available for any sort of cycle facilities. Well, there are "cycle facilities", if you include cycle parking stands with that phrase. The part of the pavement that remains after the chunk taken out of it by the car parking has also been used for these curious, newly-installed stands by the "Biking Borough". 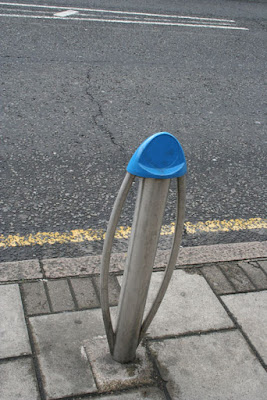 But that's not what I mean by "cycle facilities". For Church Lane is a difficult and intimidating street to cycle along, being a rat run, with high speeds, intermittent blocks of parking and stopping buses which a cyclist needs to pull out around into the 30+ mph traffic stream, wide lanes in both directions encouraging these high speeds, with occasional pinch points at the pedestrian islands where drivers tend to try to overtake cyclists dangerously, and prevalent poor driving standards, the norm in north Brent. By "cycle facilities" I mean space in which to cycle with a measure of subjective safety, which would mean cycle lanes or cycle tracks. The space is clearly there, but the street would need some rearranging to accommodate them. At present, it is arranged to allow lots of parking, and excess space on the road, which leads to speeding. Note how none of the several cycle stands are in use, in the middle of a working day. This is a measure of how little cycling there is here, itself a measure of the bad environment.

But to go back to Brent's pavement parking "exception criteria", we read:
There are more criteria, you can read them if you wish. But note that the first three have all been disregarded here. The parking of vehicles wholly in the carriageway would not reduce the width of the carriageway to less than 3 metres, even if it were allowed on both sides, because the carriageway is the main road, not the service road. And even if you interpret carriageway as the service road, which I think is technically wrong, you could still have more than 3 metres width, with parking, if you put double-yellow lines on one side. There is no law, national or local, which says you need parking on both sides of a narrow service road.

The second criteria is also broken: there is not 1.2 metres available for pedestrians on the outer pavement. Look at the placing of the tree in the first picture of the row of parked cars. And, clearly, this is a shopping area, so the third criterion is violated.

I would like to know why Brent's traffic planners are ignoring the council's own criteria for allowing pavement parking. Of course, I know why. It is due to political pressure. There is a recession on. There are lots of small local shops going out of business. There is a prevailing public feeling here, in the outer suburbs, that trade for small shops is inextricably linked to the availability of car parking, and that parking restrictions, and even parking charges, are a contributory factor in businesses going under. There is a feeling that these shops cannot compete with supermarkets, with shopping centres like Brent Cross and Westfield, and with the retail sheds, for the want of the practically unlimited free parking that these provide. I have encountered this view at the Brent Council local Consultative Forum for this area. The alternative view, that of course I have tried to put, that most shoppers, even in these car-dependent suburbs, do not actually arrive by car, and that dedicating the streets to cars in this way produces an uninviting shopping environment for those using bus, foot, and bike, gets very little shrift.

The truth is that shops are having a hard time irrespective of parking regimes, and they would be having a hard time if there was not a recession. People don't have to go to shops now. I rarely do so. There is the on-line alternative, for everything. The more unpleasant the streets are made, to try to pack in more parked cars, the less shopping I will do in small local shops like these. I suspect I am not alone in this. To compete with the internet and the shopping malls, the small parades of suburban shops need to be able to provide something better than this inconvenient shabbiness on the fringes of a dangerous rat-run. And that's down to local authorities having a bit more backbone, and planning vision, than this.