All the fun of the fair

This festive season there is a funfair in Hyde Park. I took these photos on the Saturday before last. 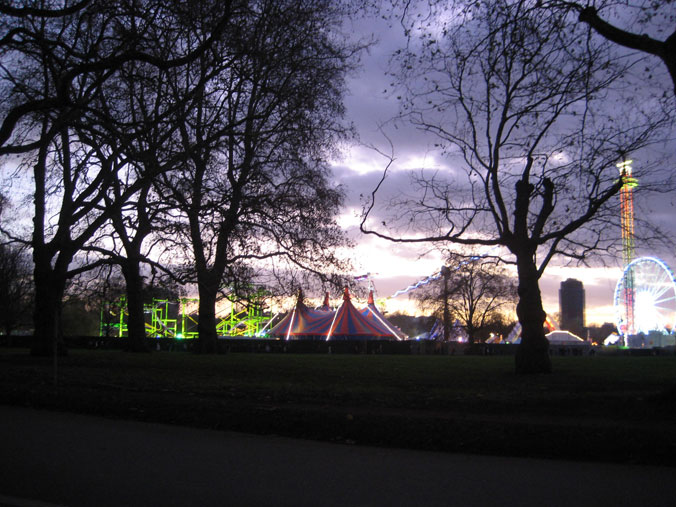 The presence of the funfair, and all the other Londoners here for whatever other reason, causes the cycle route at the south-east corner of the park to look like this: 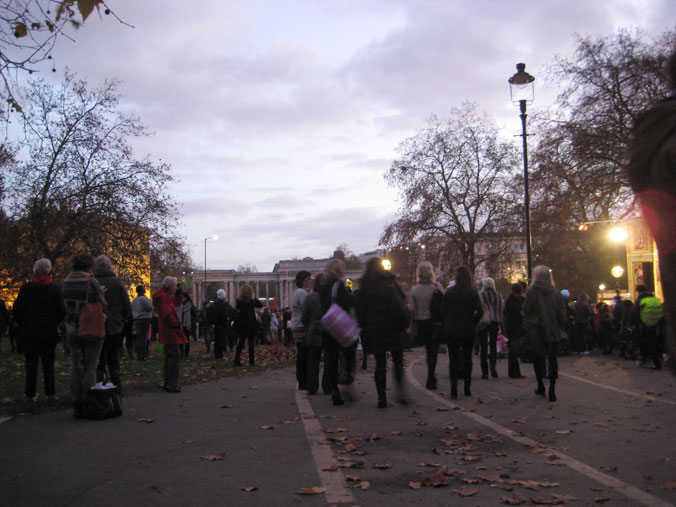 It has become unusable and totally impassable on a bike due to the crowds of pedestrians. It is slow enough on foot. Now of course we all know that the West End does attract crowds at Christmas, and nobody wants to be a killjoy about people enjoying innocent entertainments in the park. But is this sensible? Would the authorities allow the equivalent route for cars, Park Lane, to be rendered impassable to vehicles by crowds of pedestrains? I doubt it.

This kind of situation arising on a major cycle route in London is symptomatic of failure of design and planning. It is a result of cycle facilities, as always, being woven-in around other features of the city as a total afterthought, a squeezed-in compromise between various public authorities all more or less uncomprehending of the actual requirements for proper cycle routes.

There is always a problem with the route at this point. The decent-width of line-segregated cycle and skate path on Broad Walk, parallel to Park Lane, progressively becomes narrowed as it goes round the corner, crosses Serpentine Road (without a clear, sensibly-marked crossing or clear priorities vis-a-vis pedestrians, cyclists and cars) and joins Rotten Row. Here it becomes constrained down to (I guess) a couple of metres width: ludicrous for a heavily-used bi-directional cycle path.

The reason for all this is that when the path was created, which goes back at least 25 years I think (it was part of the Ambassador's Cycle Route put in by the GLC: who remembers that now?), by the gracious goodwill of the Royal Parks authorities, who had never before allowed cycling at all, nothing was actually changed. A line was merely painted bisecting the original pedestrian paths. Since then, cycling in London has greatly expanded, and (wholly inadequate) attempts at implementing dedicated cycle crossings at Hyde Park Corner have been made, other local cycle facilities have been constructed, and these have contributed to an enormous increase in use for both leisure and commuting cycling, this stretch having become a critical part of many cyclists' commute. Yet still nothing has actually been changed.

The southern arm of the cycle path circuit of the park could have been accommodated properly, either by widening the existing path, or, probably better, by moving it completely away from the main pedestrian areas by transferring it to a re-designed South Carriage Drive, where, by reallocating the space on this under-used but fast road, through construction of a proper kerb-segregated bi-directional cycle path, the problems could have been solved, and all pedestrian-cycle conflict eliminated. But these options would have actually involved spending a little bit of money, not on the perennial, pointless "attitude studies" of users so beloved of our parks authorities, but on actually altering things to fit in with how the activities of Londoners have changed over time. The simple fact is that Londoners now want and need to do different things than in the past, and our roads, paths and open spaces do need to change to accommodate these. There needn't be any loss of green space, but there does need to be proper planning for cycling. The space for cycling should, as far as possible, be taken out of roads, not out of paths, and there should be decent, safe, high-capacity designs for the crossing-points between motor and cycle flows.

The tendency in the UK has always been for planners to think of cycling and walking as almost the same thing, to put them into the same "bucket", accommodate them similarly with things like Toucan push-button crossings, and divide between the two modes a pittance of space, leaving the motorised hegemony unchallenged, creating conflict and ill-will between the sustainable transport modes through so doing.

We see this tendency even in recent official publications, such as the Department for Transport's October 2011 policy paper Signing the Way. Although this paper contains some good suggestions, notably the proposal to allow local authorities to put up a sign simple creating an exception to one-way roads for cyclists without any other infrastructure (a practice that has long been normal on the continent), the confusion in thinking over the nature of cycling is apparent in the proposal to allow cycle connections to be established by allowing cycling over zebra crossings. Apparently the CTC has lobbied for this, but it is a foolish idea.

The basic idea of zebra crossings, as places where pedestrians cross the road and all vehicles must stop for them, should not be confused in this way. Instead, cyclists only need proper junctions between proper, clearly demarcated cycle paths and roads, marked with the normal priority markings, or equipped with signals, hence treating cyclists on cycle paths as a proper flow of traffic, as they do in the Netherlands. Cyclists should stop at zebra crossings, they should not ride across them, because they are vehicles. This principle should not become confused. Otherwise, we just get more of the button-and-sheep-pen cycle crossing nonsense (a brand new example of which in Barnet has been videoed by Londonneur).

Cycling is just completely different to driving, and completely different to walking. Though when flows are low and vehicle speeds are kept down, a mixture is sometimes possible, for transport purposes in the centre of a dense, massive city, with heavy flows of all three, the infrastructure should clearly and safely separate the modes and allow none of them to block or render impractical another. This seems to me to be common-sense, and I think it's time our planners caught up with the idea.