Here's a late reminder about the formal launch tomorrow in London of the Cycling Embassy of Great Britain. I happen to be on the Management Committee of this not yet very august institution. However, it is rapidly becoming more august, with the Embassy of the Kingdom of the Netherlands promising to send a senior representative to the launch, their Head of Public Diplomacy, Press and Culture.

In case you don't yet know what it is, the Cycling Embassy is a new national campaign to get proper cycling infrastructure in Britain on the continental model, with the idea of thus moving Britain towards a mass cycling culture.

The launch takes place on the south side of Lambeth Bridge with a press call against the backdrop of the Houses of Parliament at 12:00 am. (Gather at 11:30). Smart everyday wear please – as this is a campaign for "everyday" cycling people are discouraged from looking like stereotypical cyclists.

There will then be a very short ride across Lambeth Bridge (intended to be a ride on "London's worst cycle lane", but I hear the bridge was resurfaced last night – did the authorities get wind of our plans? – so the lane may have gone or may have been improved), and then a celebratory picnic in Victoria Tower Gardens. Bring food and drink but not glass or alcohol. This should be a good opportunity to network and meet cyclists from round the country who are interested in the infrastructure issue. Later there will be an infrastructure safari around the Royal Parks led by Mark Ames of the ibikelondon blog.

The weather forecast is excellent – it should be warm and sunny – rather better in fact than for Sunday, when it looks like it will rain for the Mayor of London's Skyride. For the Skyride I will be leading a Brent Cyclists ride from Kingsbury Station to St James's Park, starting at 10:00am. All cyclists welcome.

The Vole will be in attendance at both these events, and he recently put together a poster for the Cycling Embassy poster competition. He hopes you like it. And he hopes that the Cycling Embassy launch will signal a bright new dawn for everyday cycling in the UK. 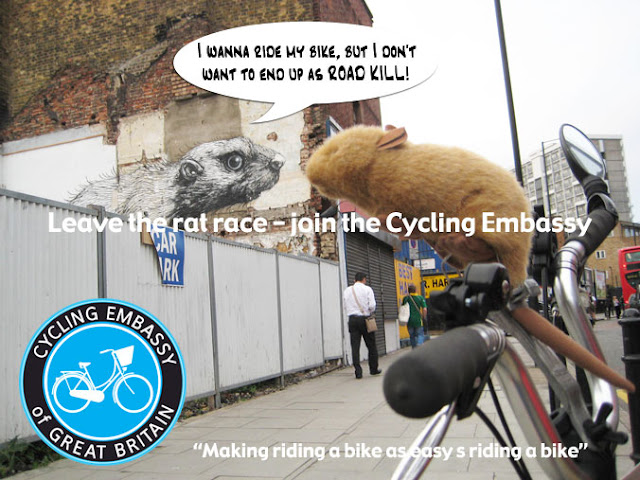