All credit to the leadership of LCC for organising an "alternative vote" referendum of the membership to determine its headline campaign demand for the 2012 Mayoral elections. If you are a member, do vote. The choices are:


1) Start Right: getting 100,000 children cycling regularly to school
2) Love Thy Neighbourhood: double the number of local journeys by bike
3) Go Dutch: clear space for cycling on main roads in every borough
4) Unwind: replace the 10 worst gyratories with cycle-friendly junction

The choices are explained further on this page.


Option 3 is a committee-watered-down wording of what I wanted. The committee was afraid of the horrible word "segregation" and didn't want to use it. So the clarity of "segregated space" became the nastily ambiguous "clear space". And the wording of the "target",


International standard space for cycling on at least one major road in every borough within the next mayoralty,

is also horribly unclear. What kind of space, how much of it, and how many miles of it, are the questions that are begged. And another problem with this is that there are boroughs (e.g. Harrow) where there are no roads under Mayoral control. The wording I suggested to the LCC Campaigns Committee,


Upgrade all the Cycle Superhighways to the Dutch standard of cycle infrastructure within the next mayoralty,

was far better, being a precise and clear demand. All the Mayor would have to do to fulfil that would be to get some Dutch engineers and tell them to get on with it (or send his people on one of David Hembrow's study tours to find out how).


Similar blurring and watering-down of what members very clearly want by the small activist core of opponents of segregated infrastructure has happened before. Five or six years ago when LCC held a big consultation of members on what its "vision" for London should be (this was the Blair era when we had more "visions" than in the Old Testament), the overwhelming call went up: "Make London like Amsterdam or Copenhagen". Which the then leadership turned into the empty slogan "Working for a world-class cycling city". And a lot of good that did.

I think, however, it should be obvious to readers which option I recommend members vote for, if we are not to have another 30 years of largely ineffective campaigning for cycling in London. The campaign the LCC carries out on this occasion may or may not have an effect on the policies of the next Mayor, but this vote should set the campaigning direction of the organisation for the future, and, as the largest cycling organisation in the UK that is primarily a campaigning one, the effect of LCC's new position will be felt nationally.
What's wrong with the other three options? Well, 1 and 2 are just suggesting putting in place more of the "fantasy targets" beloved of UK cycling policy. The Mayor cannot get 100,000 children cycling, or double the number of local journeys made by bike, by magic. The Mayor can just agree these are desirable targets and then do nothing, forgetting them as all the other fantasy cycling targets get forgotten. They certainly cannot be achieved without doing Option 3 first.
Option 4, the gyratories, properly gets absorbed into Option 3. High-standard infrastructure on a number of priority routes would imply solving the gyratory barriers for cyclists. But to call for the removal of the gyratories as an objective in itself is a mistake, and one that LCC has made before, about 7 years ago, when it had a big "Junctions Campaign" that achieved little. It achieved little because removal of such gyratories is not politically likely before we have got far more people cycling through the provision of attractive, continuous routes. It is also arguable that removal of gyratories is not necessarily desirable. In a transformed environment they could be useful in creating longer, less convenient journeys for cars than for bikes – acting as positive priority features, as they do in The Netherlands. The best possible result from a isolated junctions campaign is a few "spot improvements" on the road network that will not create the continuous, obviously safe and attractive routes we need to get a much bigger section of the population cycling. The roads leading to the junctions would still be horrible. Replacing existing gyratories with clogged-up crossroads, without providing dedicated space for cycling, would not be a breakthrough, and would not get many more people cycling.

A nice aspect of this poll is that you can see how it is doing in real time. It's early days, with only 265 votes cast out of an electorate of 11,000, but here's the results early on Wednesday morning, 6 July: 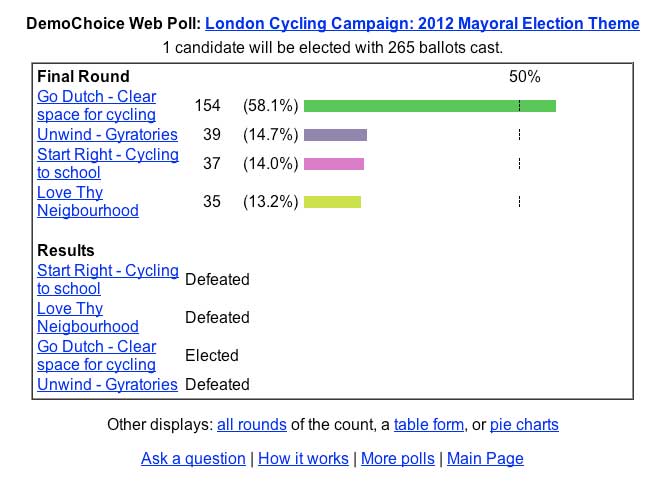 Quelle suprise. Paul Gannon wrote 11 years ago after Camden built its segregated cycle tracks that "Current cyclists vote with their wheels for segregated facilities". Well today they can vote with their mice as well, and the vole is pleased about that.