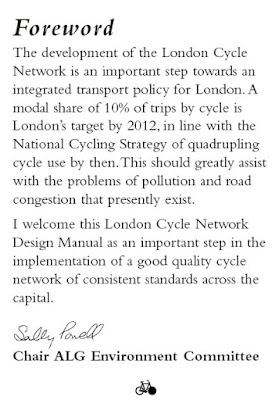 We will then experience the fabled "safety in numbers effect", not to mention the equally-fabled "critical mass", that will give us some of the safest cycling conditions in the world!

Well, of course, not really. For the text to the right is the Foreword to the London Cycle Network Design Manual, published in 1998 by the Association of London Government (ALG), an organisation that is now called London Councils, that resides at the whimsical address of 59½ Southwark Street SE1. (Thanks to Freewheeler for bringing this to my attention). And "whimsical" would be a good word to describe this document. It refers to the National Cycling Strategy, which was published by whatever the Department for Transport was called at that time, in 1996. Now, unfortunately, this potentially even more interesting document seems now to be unavailable on the net. It has been sloughed off from the current DfT website like an embarrassing piece of 1990s fashion and transferred, appropriately enough, to The National Archives. Unfortunately, when you click on the links given on that webpage, you get Error 404 "Page not found" messages. Is somebody trying to hide something embarrassing?

Probably, no, nobody will be embarrassed. The politicians and civil servants involved with the DfT and the NCS at that time will have moved on, retired or died. Who cares what the NCS in 1996 said? Except that it matters it we are to learn anything from history. As someone once said, if you learn nothing from history, you are destined to keep repeating the same mistakes over and over again. Which is exactly what happens with UK cycling policy and the institutional amnesia which clouds and befuddles it. For the National Cycling Strategy of 1996 totally failed, as can be seen from this graph (courtesy Jim): 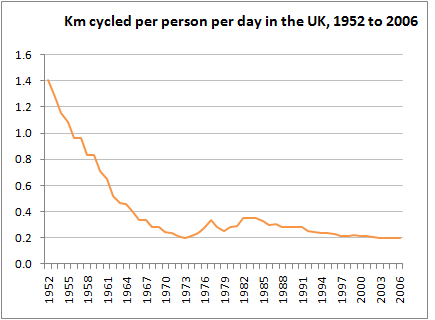 Far from increasing in response to the Strategy, for the 10 years following its publication, cycling continued to decline in the UK. So, are we going to see a high-level, comprehensive and well-resourced enquiry in the DfT as to why it failed, with recommendations going to ministers as to how to succeed in cycling policy in the future? Or will they just be content with burying the documents from that period in The National Archive, because they don't really care about cycling anyway?

It's not just the DfT (though, because they actually have the power, they must take most of the stick), or the London Councils, or TfL. In the background to this lurk the policies of the major cycling lobby groups, the CTC, CCN (Cyclenation), and LCC. Much of the thinking in UK cycling policy over the last two decades has been based on fundamental logical fallacies promoted by these organisations. Like the "Safety in Numbers" effect that CTC often try to promote; this graph from one of their publications: 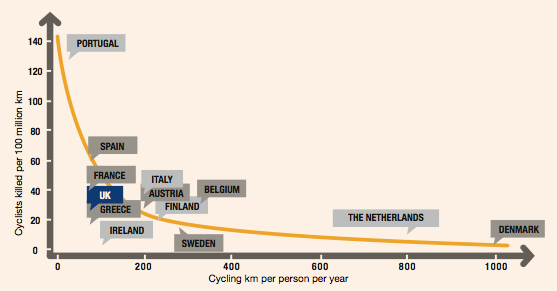 While there is no dispute about the data in this graph, the CTC's "Safety in Numbers" conclusion does not follow from it. There is a correlation between safety and numbers of cyclists all right, a very strong one, but they have the causality the wrong way round. The causality demonstrated by this graph does not run:

Some unspecified method(s) of promoting cycling--->more cyclists on the roads--->safer cycling;

There is a clear three-way correlation enshrined in the graph between the provision of effective segregated cycle facilities, numbers, and safety. The countries above the 200km per person per year ordinate have all invested in extensive networks of segregated cycle tracks. Those just below the 200 level, Italy and Austria, have some good segregated infrastructure but not so extensive. The countries lower down do not have such infrastructure. The Netherlands now has more and better infrastructure than Denmark, and I think these figures are out of date and the mode share is now higher in The Netherlands than Denmark. I may be corrected on that, nevertheless, it appears that the correlation with infrastructure is pretty much perfect. The scientific conclusion is that to get the numbers and safety you need the quality segregated infrastructure – full stop.


I was pointing this three-way correlation out in an article (written with Paul Gannon) in London Cyclist back in 2002 (October). Other key sets of data we pointed to in that article were the balance between male and female cyclists in various countries and their age distributions, as a barometer of conditions (what David Henbrow has more recently termed subjective safety), on the thesis that conditions that require the adoption of assertive, "vehicular" styles of cycling result in young men being disproportionately represented in the cycling population, as in the UK: 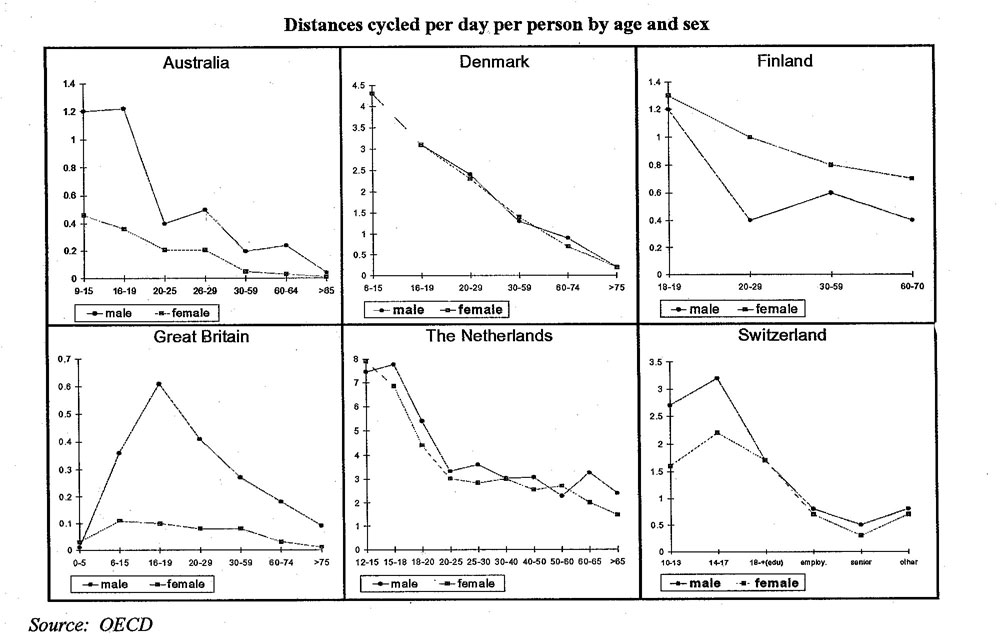 This data, from the 1998 OECD report Safety of Vulnerable Road Users, shows very clearly that the higher the overall cycling rate, the more equal the gender balance. Denmark and The Netherlands have almost equal cycling rates between men and women across the age spectrum, while the intermediate cycling-rate countries have rather more men than women cycling, and the UK is (was) totally out of balance, with a ratio of 6:1 male:female at age 19. The other important thing about the UK distribution in the 1990s was the lack of children cycling, compared to the other countries graphed. This must have worsened since then. Note that the data in these graphs has been normalised so that the vertical scales are different. The Netherlands has (had) three times as many km cycled by women over 65, their lowest rate, as the UK has (had) cycled by 19-year old men, our highest.


Paul Gannon and I were pointing out a decade ago was that there was no hope of ever getting much higher levels of cycling in the UK without creating conditions that encouraged much larger numbers of women, children, and older people on to bikes. To meet the objectives of the National Cycling Strategy, the demographics of cycling in the UK needed to be transformed, and that required the creation of the environments, similar to those in the north European high-cycling nations, that demonstrably resulted in those groups adopting cycling en-masse. Simply trying to raise numbers based on the preponderance of young men cycling in the conditions that required fast, assertive cycling in the motor traffic dominated environment was never going to work.


Because of the lack of a clear analysis of these facts and all this data, which was all available in the 1990s, the National Cycling Strategy of 1996, all its subsequent revisions, and the London Cycle Network plan from 1998, and its revision in the later LCN+ programme, down to the current Mayor of London's cycling programmes (which have the much more modest target of a 4.3% mode share by 2026), all have, and all will (without a radical change of direction in the case of the current programmes), fail.


Sorry, Cyclists of London, and Cyclists of Britain, you can't rejoice. Not yet a while, anyway.