LCC gets the wrong image

I have been unusually complimentary about the London Cycling Campaign recently, agreeing with its statements and praising its doings (except for the new logo and website design which I have criticised as looking like something to do with giving blood). So... now to redress the balance. Ha. 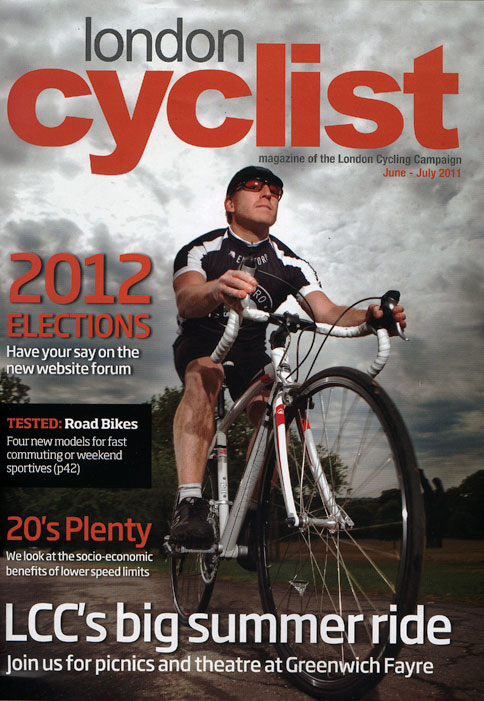 The image reinforces all the worst stereotypes of cycling being about macho men dressed in special clothes racing about on slick, pricey, non-utility bikes. What LCC should have done, which they rarely do, is to use a picture which is topical to current campaigns or to concerns of cyclists in London. So, cycling on Blackfriars Bridge would have been and ideal subject, or, more positively, in the City, the City having shown some sign of adopting pro-cycling policies recently.

The reason they have used this picture is because it accompanies their article on testing "road bikes", That's sports cycling jargon, which means, for the uninitiated, racing bikes. But that's not explained, it's assumed knowledge. Inside, it says:


Generally regarded as the lightest and nippiest of rides, a good road bike will serve as commuter workhorse during the week and sportive warrior at the weekend.

Will it really? No mudguards, lights or rack. Is that really a useful bike for the typical commuter? I'm not going to go all Dutch-fundamentalist on this. I don't insist on a chain guard, dynamo, integral locking, skirt guard, and impossible-to-tip-over stand. But I would like something more than a bare-bones bike appropriate to doing a time trial on to be promoted as a good "commuter workhorse".

I have long wondered why the UK bike trade insists on trying to provide the wrong bikes to virtually everybody except a few cycle sport enthusiasts. Surely they should be able to see what side their bread should be buttered. Surely they should be able to see that the market for practical general-purpose bikes should be vastly larger than that for specialist sports machines. But they stubbornly go on trying to market the wrong products for the usage to which most people wish to put bikes. I really think this is a significant factor in the failure of the UK to achieve a real cycling culture.

But, apart from all that, this bloke on this bike does sit oddly next to the cover headlines, particularly the "20's Plenty" campaign. OK, what he is riding and what he is wearing is not important, he is a cyclist, that is the main thing, therefore part of the solution to the UK's transport problems. But if you are going to have a campaign message about the desirability of creating slower, more liveable streets, I just don't think it helps to use an aggressive image that seems to be about sport and speed. It will not help "win friends and influence people" outside cycling's current ranks.*

This is almost as bad (but not as ludicrous as) Brent Council's attempt at promoting its cycling credentials on this page where it advertises its winning a paltry £300, 000 of "Biking Borough" funding from TfL:

Cycling has health and environmental benefits for the borough and is already a high priority in the council's Sports and Physical Activity Strategy. The council submitted a funding application request in March and has been awarded £294,500 under the Biking Boroughs scheme.

As part of the GLA's commitment to cycling, Biking Boroughs aims to encourage people to cycle more in outer London. TfL hopes this will be achieved through, for example, improvements to roads and facilities, cycle training, better security and cycle promotion.

This text lies under this amazing image, which I have not altered in any way:

This is their image of "biking" in the "Biking Borough". Is this meant to represent cycling on the North Circular Road? Why are the cyclists squashed, with non-round wheels? Are they going so fast that effects of relativistic physics are taking hold, with distance being contracted in the direction of their motion relative to the observer? (In fact, no, the distortion is the wrong way.) Cycling at close to the speed of light would indeed be a good way in which cyclists could ensure their own safety on the North Circular. Perhaps it is the only way to do it. In this way cyclists could ensure they had got all round before the motorists had even seen them, as the motorists would be seen frozen in time, virtually unmoving, in the cyclists' frame of reference. And if a collision did occur, the motor vehicle would come off very much the worse, what with the relativistic mass factor gain the cyclist would achieve at near light-speed, giving him a huge momentum. He would just slice through the car.

Well, I can laugh at Brent Council's webmasters, because they are amateurs (when it comes to cycling). After all, they see so few ordinary cyclists in Brent, particularly in north Brent, where the council offices all are located, that they could be forgiven for not knowing what one looks like. But LCC should know what it is doing with these things. Look at, by contrast, the images the Cycling Embassy of Great Britain has been using on its website.

The At War with the Motorist blog is on about the same thing:


None of this is to denigrate racing cycling and mountain biking and the people who enjoy those activities. I am merely indifferent to them, just as the average car driver has no interest in formula one, and the average pedestrian would guess that “bagging a munro” has something to do with the waste products of canine digestion. Only with bicycles do you get magazines that put a feature about olympic athletes next to a news item about commuter infrastructure. And that’s all part of the problem.

It is indeed. The word "cycling" in English, unfortunately, means simultaneously two completely different things: the sporting activity, and the mode of transport. The same is not true of the words "driving" or "motoring". The confusion this engenders in the mind of what used to be called, back in the days when printing was black and white, "the layman", is very sad. It really holds back utility cycling in the English-speaking world. Utility cycling in the English-speaking world needs to keep explaining itself. Because a picture is worth a thousand words, getting the pictures wrong makes that task a thousand times harder.

*This paragraph is a change to the one I originally wrote which caused some, justified, criticism, in the comments.